On 22nd July HMS Argyll successfully test-fired several Sea Ceptor missiles at the Outer Hebredies test range. This short-range air defence missile is replacing the Sea Wolf missile system on the RN’s Type 23 frigates and will also be fitted to the Type 26 frigates.
Sea Ceptor uses MBDA’s Common Anti-air Modular Missile (CAMM) and the similar Land Ceptor version will replace Rapier in service with the British Army. CAMM is ‘cold launched’ using compressed air, before the rocket motors ignite when well clear of the ship. This simplifies the design of the launch silo. Sea Ceptor is intended to give the Royal Navy an improved shield against a new generation of supersonic anti-ship missiles, fast jets, helicopters and unmanned aerial vehicles.
The missile can reach speeds of Mach 3 and can engage multiple targets simultaneously, protecting an area of around 500 square miles. With a range of approximately 25 km, almost double that of Sea Wolf, it significantly extends the area under its protective umbrella. The escort vessels carrying the system are is also intended to form a critical part of the protection for the Queen Elizabeth class aircraft carriers.
The missile is guided by the Type 997 Artisan medium range 3D surveillance radar, recently installed across the Type 23 frigate fleet, replacing the Type 996. Sea Wolf also required two Type 911 fire control radars which have been removed and replaced with small data-link aerials that transmit guidance data to the Sea Ceptor. Removal of the 911 is a considerable saving on top weight and could allow the fitting of other equipment on the ships. HMS Argyll has 32 Sea Ceptor cells, a like-for-like replacement of the 32 Sea wolf Cells. The Type 26 frigate will have greater capacity with a 24-cell silo on the foredeck and a 24-cell silo aft, behind the funnel.
At the time of writing HMS Argyll, HMS Westminster and HMS Montrose have received Sea Ceptor. Eventually, all 13 Type 23s will receive the system during an ongoing programme of mid-life refits. HMS Argyll will conduct further firing trials of the system before she deploys to Japan next year. 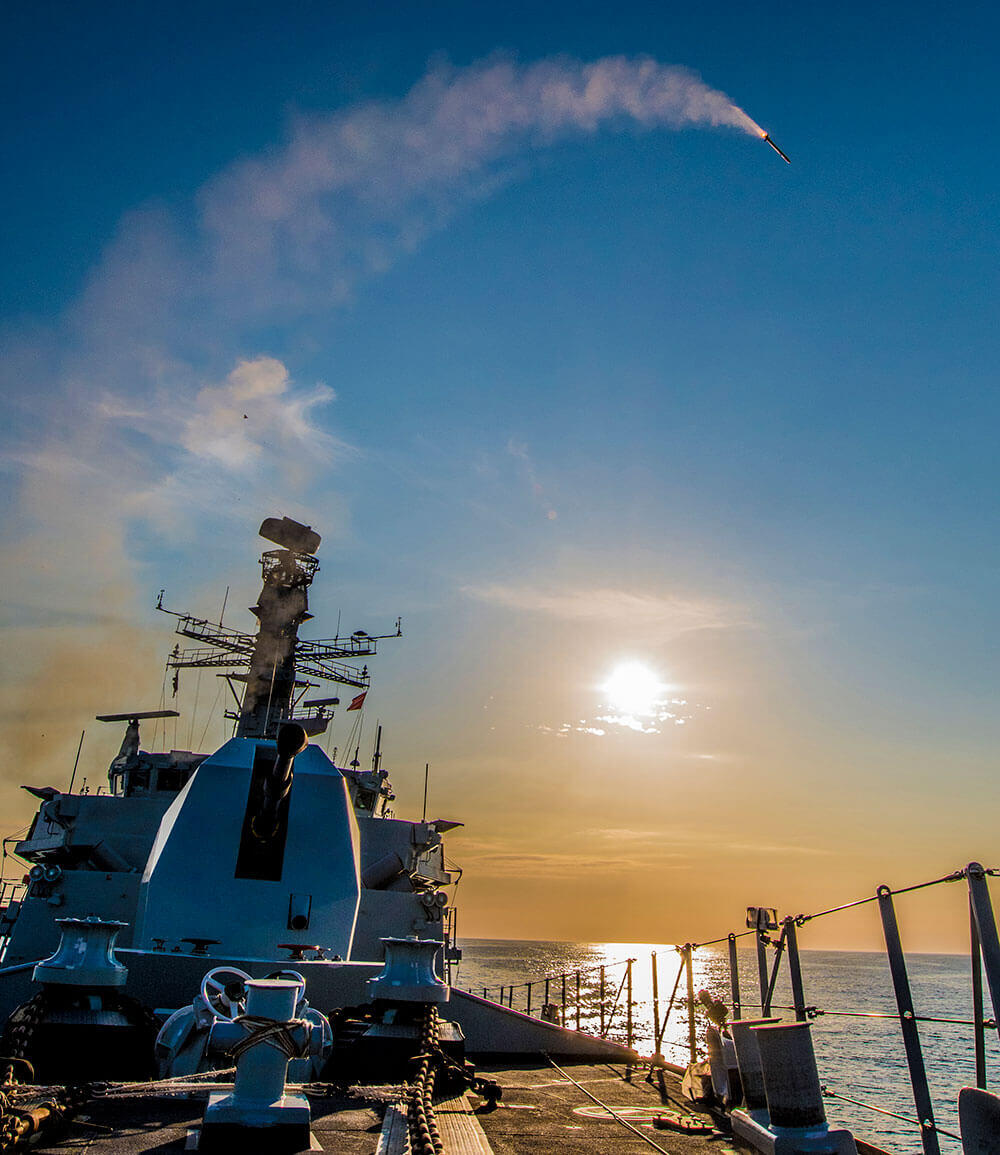 Awesome footage! Now fit them to the new carriers!

It does appear like an omission of astonishing proportions. It could make the failure to up armour the deck on HMS Hood look like we do actually have a genetic blind spot ‘Couldn’t possibly happen a QE, look at her escorts… ‘
Neither has Martlet been earmarked other than helo delivery.
Would love to know where DEW projects are at as maybe that’s why the omissions – or maybe I’m being optimistic

Care to share David? Ease my concern at why QEs will be the only carriers globally without missile point defence?

Thanks I thought the cut back

Why are we sending ships to Japan with the standoff over there with China over the Senkaku islands and China’s artificial islands? North Korea has nukes, for gods sake.
This isn’t even a NATO deployment. The Chinese have the DF-21D, so we need to stay out of fighting on the other side of the world in geographically restricted waterways near China and Korea.

This is post Brexit Britain. We are so desperate for trade deals that we will involve ourselves in spats in every part of the world.
So we send a semi-armed ship and its crew into harms way; NK has made it clear it views joint exercises as a potential precursor for invasion.

Who cares what North Korea thinks? We are perfectly entitled to sail our ships in international waters and visit (with their permission) whoever we wish. Trying to appease will only encourage the ambitions of Pyongyang in the long run. HMS Argyll is to conduct a friendly visit to an ally – didn’t you claim in a previous post, that Royal Navy sailors wanted to see more of the world?

Good old Ahmed will get pissed off no matter what the RN does (possible excepting disband and retire from the world stage).

Who said anything about fighting? One of our ships is going to excercise with a friendly nation, much as we do regularly elsewhere, as part of the recently announced deal on defence cooperation. The idea is also, I suspect to showcase Sea Ceptor to the Japanese, Australia and New Zealand (who have committed to the weapon already!)
DF-21D has never even been tested against a ship at sea, and would require extremely complex and accurate target information to have even a remote chance of hitting a moving target (which is why the Russians gave up on the concept) Also as a ballistic weapon, its use could be confused with an ICBM launch, which could have very far reaching consequences.
The worlds oceans are free for all to use, and the Chinese can have no reason to object, especially in light of their warships recent deployment to European waters. As for nukes, not even North Korea would claim to be able to land a missile on the UK. The fact is that a missile launch against anyone would be tantamount to national suicide!

Greater reason for the UK to invest in ABM technology for the T45.

Delightfully named LPD Uss Ponce to Argentina! US state department engaging in tiresome clever dickery again. Last time it was the Russians threatening to lease Su24s(knowing full well that they couldn’t afford to buy them).Just so you know where you stand with F35s,that cannot be operated without US approval.
It’s 45 years old and there’s no way that the Argentinians have the resources to operate it, but it would be a constant if not particularly credible threat. For its only likely mission, it only has to exist. Even this would be a challenge for the Argentinian government at the moment.
Personally I would be in favour of gifting the River batch 1s as a return for the help the Argentinians gave us during the 2 world war,on condition that they agree to a sensible fisheries plan.
Ceptor launch very tidy. Did it hit anything?

There is zero truth to the story that the Russians offered the Su24 to Argentina, the source of the myth was a South American blog which put up a joke article on their equivalent of April fools day that happened to coincide with a visit to Argentina by a Russian trade delegation.
Both Argentina and Russia have denied that any offer was made for Su24, unfortunately a news aggregation site picked up the tongue in cheek article and before anybody did some basic fact checking every British tabloid newspaper and a fair few serious broad sheets plus a few defence aviation websites and magazines who should have known better ran with it. Unfortunately to make matters worse various retired Air Vice Marshall’s, Generals and Admirals ran with it and merrily started talking to the press as if it was a serious possibility to suit their own agendas.
As for the USS Ponce, I can believe Argentina showed some interest but I highly doubt anything will come of it. A nearly forty year old steam turbine propelled vessel will be very difficult for their navy to run, it would be a terrible draw on their already stretched defence budget. They need OPV at them moment not an elderly LPD!
If they really want an LPD than they can buy for virtually the same money a brand new variant of the Makassar class two of which are being license built in Peru at the moment.
https://en.wikipedia.org/wiki/Makassar-class_landing_platform_dock

I read that the Argentines managed to damage yet another ship last week, this time a patrol ship in the Beagle Channel. I had to laugh when I read that it was called Islas Malvinas.

I saw that article. They collided with a pier at thier own base.

The Argies cannot keep a tranch of 50 year old A-4 Skyhawks airworthy, so the notion of them buying and flying Suhkoi’s is laughable. As for buying the Ponce, it would be next to useless for them,

Perhaps they could be encouraged to waste their money on the ponce? Nonetheless,why didn’t the Americans just say no?

I honestly had heard about no such story about the Americans possibly selling this vessel to the Argies until I saw this thread, so cannot really speak to it.

Are you at the wind up? Give the argies the River batch 1s, really? I would be more inclined to give any of their ships in the Falklands EEZ a slap. I would rather have to eat the 3 ships than give them to an enemy who still wont stop banging the Falklands drum. Besides they would only end up on the harbour bottom same as the rest of their navy, better to sink it as a reef and cut out the middleman.

I did attach conditions (that are unlikely to be met). We don’t want them (or batch 2 for that matter) and the Argentinians are desperate for this type of ship.I think a bit of diplomacy could do no harm, and is far more likely to yield results than your approach which leaves us constantly facing blackmail at the UN.

Bloke down the pub

‘The missile is guided by the Type 997 Artisan medium range 3D surveillance radar, recently installed across the Type 23 frigate fleet’
Only for the initial direction that the missile is launched in, it has its own sensors for the rest of the flight.

Donations via PayPal towards running costs of this website would be most welcome. Thank you.